Revelation 14 The lamb on Mount Zion, the 144.000 and the names on their foreheads, the four flying angels - Sermon Wilfred 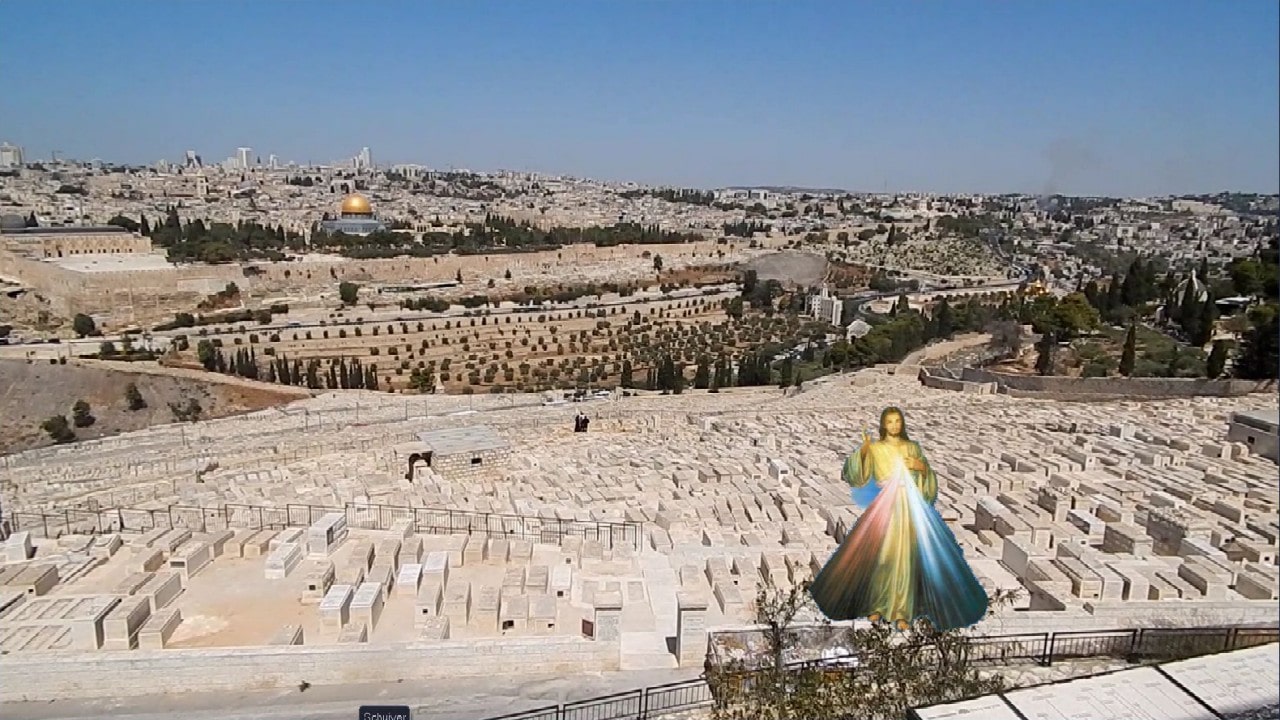 Who is the Lamb on Mount Zion in Revelation 14?

Then the LORD will go forth and fight against those nations as when he fights on a day of battle. On that day his feet shall stand on the Mount of Olives which lies before Jerusalem on the east; and the Mount of Olives shall be split in two from east to west by a very wide valley; so that one half of the Mount shall withdraw northward, and the other half southward.

There it speaks that the Lord (the KING Jesus and Messiah) will fight against the nations and the Mount of Olives shall be split in two from east to west by a very wide valley; so that one half of the Mount shall withdraw northward, and the other half southward.
Revelations speaks about Zechariah 14:5 Then the LORD your God will come, and all the holy ones with Him. So clearly two events and two different mountains.

The holy ones meaning the 144.000 who had his name and his Father's name written on their foreheads, but I also think the Christians who were taken up into Heaven. And the battle of Armageddon in Hebrew (Megiddo in Revelation 16:16) starts. However, according to the Christian Jew Amir, the battle does not occur at the place Megiddo but at the Mount Zion. For believers it is not important to know now, we shall experience and know when we return from Heaven.
The four living creatures and before the elders we already meet in Revelation 4.

Verse 4 has a wide interpretation. Some say that the 144.000 are men who abstain from sexual relationship. For they are chaste (παρθένες), but that does mean they abstain, or they were married to ONLY ONE WOMAN and were faithful to her? παρθένες means young, unmarried man. Anyway they were chosen by the Lord Jesus Christ and sealed by Him on their foreheads. But remember when these are the same of Revelation 7, then they are OUT OF THE 12 TRIBES OF ISRAEL! and THEY ARE NOT THE SAINTS (=who do not belong to the 12 tribes) who have keep the commandments of God and bear testimony to Jesus (12:17). They are spotless and no lie was found in their mouth. So are we talking about other ones than Revelation 7? Because they were in the first years of the Great Tribulation and here in chapter 14 we are at the very end of the Great Tribulation. John does not inform us whether they are the same.

Who are the flying angels? 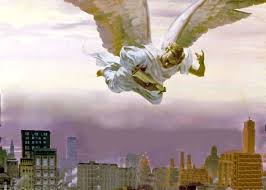 The 144.000 proclaimed the Kingdom of God in the first years, now still people on earth receive a final chance to listen. This time NOT out of the mouth of human beings, but out of the mouth of FLYING ANGELS around the earth who proclaim the eternal gospel, that is the eternal Kingdom of God, repentance of sins and the forgiveness of sins through the death and resurrection of the Son Jesus Christ. The angel is very clear: "Fear God and give him glory, for the hour of his judgment has come".
A second angel follows the first one, saying "Fallen, fallen is Babylon the great, she who made all nations drink the wine of her impure passion" which is explained in Revelation 18.
A third angel says with a loud voice "If any one worships the beast and its image, and receives a mark on his forehead or on his hand, he also shall drink the wine of God's wrath, poured unmixed into the cup of his anger, and he shall be tormented with fire and sulphur". Meaning those who accepted the mark 666, and possible that made a DNA change, the judgment upon them is announced publicly: the eternal torment with fire and sulphur, that is the lake of fire.
Verse 10 raises many questions: in the presence of the holy angels and in the presence of the Lamb. My explanation is Revelation 20:11-15 these people will be judged in front of the holy angels (and not the fallen angels) and Jesus Christ. Their all acts and inner thoughts will be revealed publicly of these people. And all holy angels (and possible the Christians who were taken up into Heaven and have received a new imperishable equal to the angels) will see the correct judgment of Jesus Christ.
These worshipers of the beast and its image will be tormented without rest, day and night. But I think this is also valid for the ones who nowadays tortured and kill Christian in prisons, all those without respect for the commandments of God giving in the Old and New Testaments. Without respect for human values and life.
Verse 13 calls for endurance of the saints to remain faithful to the laws of God. One might be thrown in prison, be tortured but they are blessed by God and will receive eternal life with God. 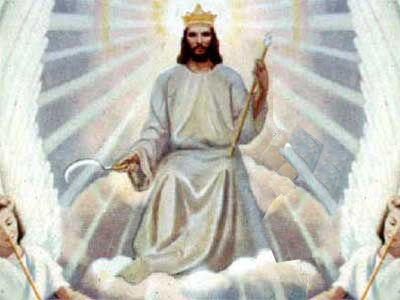 Verse 14 we see Jesus as the sower of the world, the parable in Matthew 13:24-30 and Matthew 24:31. The weeds are the sons of the evil one, who are burnt with fire. The reapers are the angels of God.
The fourth angel comes out of the temple, meaning from the presence of God and bearing a message of God Himself. Like in the parable, the owner of the field told his servants NOT to gather the weeds until the harvest was ready. The harvest of the earth is fully ripe, that is the end of the Great Tribulation. And he who sat upon the cloud swung his sickle on the earth, and the earth was reaped. Jesus and His angels then will separate the weed from the grain, that is, the evil ones will be separated from the followers of God.
Verse 17 The fifth angel comes out of the temple as well. The seventh comes from the altar, which can be the altar of sacrifices or of the incense, both referring to the sacrifices and prayers of the saints. The control of the fire is the control of the burnt altar.
The vintage (the shed blood of the murdered believers) becomes under the wrath of God. The trodden vine flows from outside the city (Jesus was crucified outside Jerusalem) as high as five feet (152 cm) and a length of 180 miles (300 km) which is the distance from Jerusalem to Eilat.